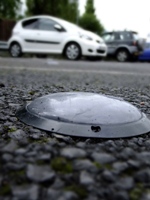 West End residents and shoppers will need to be extra careful when stepping off the kerb to cross the road when 3,000 parking pay sensors are installed in the road over the next few months as part of a plan to increase the Council’s profit from parking income by over £500,000 a year.  According to a Westminster Council report;

Trip hazards caused by ground sensors could potentially lead to claims against the Council. The specification for the sensors will set out the minimum acceptable profile above the road surface, and will stipulate that road mounted sensors should be as flush as possible with the carriageway. Sensors will sit outside of the footway, within 1 metre of the kerb. In this way it is hoped that claims will be kept to a minimum.

Government highways regulations say that the maximum height of a road stud should be between 6mm and 20mm but the council’s sensors project 28.5mm.
We say the council are putting profit above safety and urge them to have an urgent rethink.
Tweet