A traffic warden who was sitting in the car which was parked on a yellow line and with 2 wheels on the kerb opened the door just as a bus was coming! 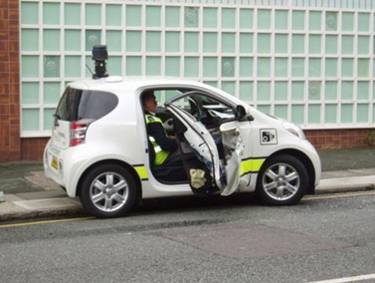 A spokesperson for the council said:

A CCTV vehicle operated by NSL was involved in a minor road traffic collision with a bus whilst carrying out parking enforcement activity on behalf of Wirral Council. “Nobody was injured, although both vehicles were damaged and were taken off the road for repair.

A replacement CCTV vehicle has been deployed by NSL so there will be no gap in the provision of parking enforcement services.

The vehicle is a Smart car fitted 11ft ‘periscope’ camera.. Its primary use is to catch and fine errant motorists who park on zig zag lines outside schools, but it also being used to snap drivers who stop on double yellow lines near to cashpoint machines.

In response to concerns that the vehicle was parked illegally the council spokesman said:

In order for the camera car to carry out its work safely, the car has special dispensation to park in some areas, when necessary, when undertaking enforcement activity. This is reviewed on a case by case basis.